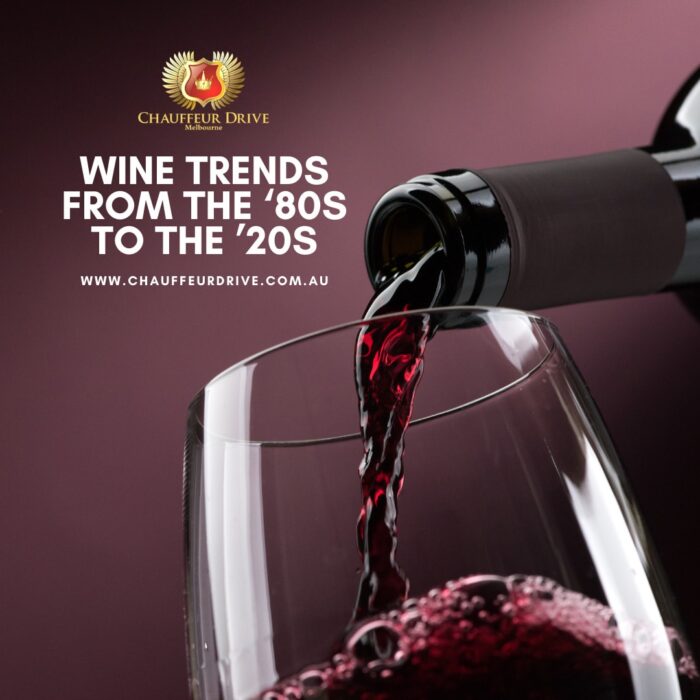 Like fashion, wine moves in trends. Wine styles come and go, one day they’re hot and the other they’re not.

As a Melbourne private tour company offering private winery tours to Yarra Valley since the 90s, we’ve experienced the country’s wine trends. We’ve had the opportunity of sharing our impressions about wine through history with our guests, and that has been fabulous!

What wine-lovers drank in the eighties differs incredibly from what they drink today, so here are the wine trends for the last five decades.

Wine in the 80s, The forgettable decade

If you liked wine, the eighties weren’t for you. While the rest of the planet was drinking cheap Chianti in basket bottles and sweet Blue Nun, Australia’s hit was still the forgettable Lindeman’s Ben Ean Moselle. Using names of other popular regions, including Burgundy, Chablis, Port or Sherry was common, as it was not as regulated as it is today.

Labelling wines by their grape variety was still rare, and producers sold more dry wine than sweet for the first time. The big boom was soon to come.

Wine in the 90s, Australia’s Boom

For Australia, the 90s were critical to building the country’s brand and reputation. Exports to Europe and America climbed impressively. They rose from around 600,000 cases to 20,000,000 a year.

Many grape grower cooperatives, which had aimed for quantity rather than quality, closed their doors or became private companies, and the ‘critter’ wines were born. Critter wines carried the figure of an animal on the label, whether it was a penguin or a kangaroo.

These colourful wines were the craze worldwide and put Australia on the map. The wines were delicious and inexpensive, but what they had in flavour, they lacked in authenticity and sense of place.

This was when we started offering private winery tours to Yarra Valley. Melbourne private tours weren’t a thing until then.

Wine in the 00s, It’s all about Terroir

The fall of an empire, Australia suffered almost a decade of draughts, and the irrigated vineyards of the Great Rivers, source of the ‘critter’ wines suffered. The shoppers were also tired of cheap and tasty; they wanted wines with a sense of place. The ’00s is the decade of ‘terroir.’

The love for big, bold wines like the Barossa Shiraz, which had made an impact a few years before, were subtly substituted for wines from colder regions like the Margaret River, Yarra Valley and Adelaide Hills.

China’s sudden hunger for fine wines changed the world of wine, too, and getting a piece of the 1.3-billion people market was the decade’s ‘space race’; one Australia won.

By 2010, the trend of organic farming had reached the mainstream, and it was time for winemakers to play their part. Everything from organic grapes to sustainable agriculture to crazy biodynamic practices were now not only well-received by consumers but expected.

It became increasingly difficult to sell a bottle of non-organic wine. Natural wines, made with little to no intervention, became a thing, and, unlike other wine trends, this one doesn’t seem to be going anywhere.

Wine in the 20s, A bright future ahead

The 2020s started with the wrong foot with the global COVID-19 pandemic. Everyone, from consumers to retailers to producers, has been forced to rethink their strategy, not only to succeed but to survive.

On the bright side, we’ve given earth a break, and humankind has had a much necessary ‘time-out’ to rethink their place on earth.

As a Melbourne private tour company offering private winery tours to Yarra Valley, we look forward to taking you on an excursion from Melbourne to see, not only how the wineries are doing today, but also what they’re plans are for the future.